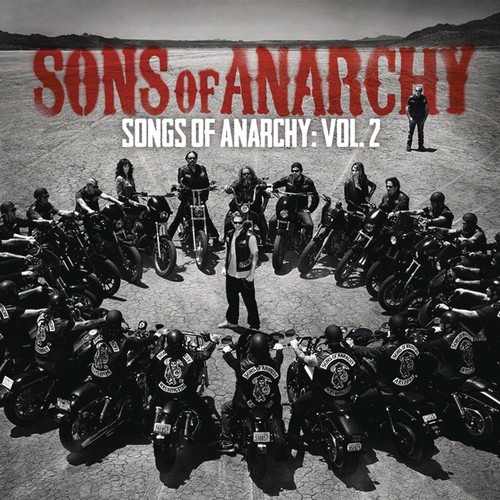 Songs of Anarchy: Vol. 2 is the second installment of music to FX's highest rated series, Sons of Anarchy. The CD features a collection of thirteen songs, including new renditions of classic tunes such as Higher Ground, To Sir with Love, The Unclouded Day and Travelin' Band . The collection kicks off with a never before heard recording of Sympathy for the Devil, by iconic rock band Jane's Addiction.

"When Jane's Addiction said they were into the idea of doing Sympathy for the Devil for the show, we were completely blown away. This was made all the more sweet because theirs was the first and only door we knocked on. Jane's Addiction is one of the few post 60 s/70's, iconic bands that resonates with our show s mythology. They have typified rebellion from their very beginnings. It seemed a natural fit between a band and a song with so many layers of meaning to the Sons of Anarchy narrative. I can proudly say that the end product speaks for itself. Working with them, as a band and as individuals, was an incredibly satisfying experience." - Bob Thiele (SOA music composer).

Jane's Addiction guitarist Dave Navarro also guest stars in the last two episodes of the season, as a member of the Byz Lats gang with close ties to Nero (Jimmy Smits).

Golden Globe® Award winning actress/singer Katey Sagal returns with a beautiful rendition of "To Sir with Love," a collaboration track with The Forest Rangers. Other notable tracks include "The Lost Boy", "No Milk Today", and the stunning recording of "Time" which features Battleme & The Forest Rangers.