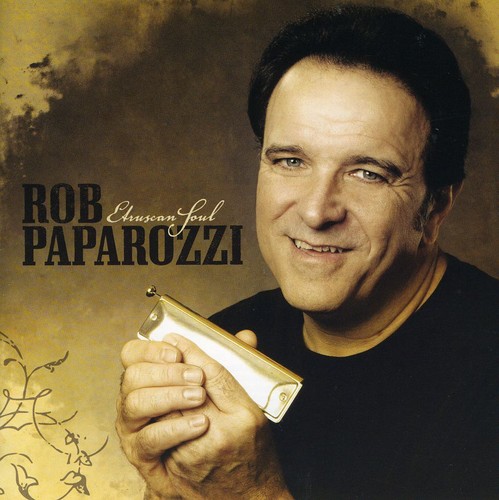 Singer-Harmonica Maestro Rob Paparozzi Showcases Range of Styles on Striking Debut Album "Etruscan Soul" "Please take the time to listen to Rob's new album. I'm positive you will be amazed if you have not heard him before." --Steve Cropper (Booker T. & the MGs, original Blues Brothers Band) "Rob's CD sounds amazing and his performances are over-the-top killing!" --Will Lee (David Letterman, Fab Faux) Native New Yorker Rob Paparozzi is a special artist who sings and plays harmonica with just the right blend of verve and empathy on his first feature album Etruscan Soul-now available on the Honeydripper Records label. The front man with the legendary, globetrotting, Blood, Sweat & Tears and the popular Tri-State area Hudson River Rats is joined on this swinging and intelligent rock-blues-soul-jazz-r&b release by world-class talent. The supporting vocalists are the one-and-only Phoebe Snow, Vanesse Thomas, and Antonique Smith. Among the stellar sideman are guitarists Leo Nocentelli (from the Meters), Chuck Rainey, Hugh McCracken, and George Naha; bassists Harvey Brooks and Will Lee; keyboardists John Korba and Ed Alstrom; and drummers Bernard "Pretty" Purdie, Chris Parker, and Shawn Pelton. Paparozzi says in the liner notes that these "skilled musicians help me paint the muse deep inside my 'Etruscan Soul'." It's way more than a snappy album title. The phrase is defined throughout the 15 songs of the recording by the depth and clarity of the man's singing and his harmonica playing. The special you-know-it-when-you-hear-it spirit-yes, Etruscan Soul-that motors Paparozzi's music traces back many centuries to his family's origins in ancient Etruria, the west-central Italian country whose great civilization was eclipsed by Rome in the third century B. C. Talk about good genes. Combining soulfulness and musical imagination, Paparozzi exhibits a natural ability to personalize songs that rate among his all-time favorites. He has chosen carefully from the treasure-troves of classic pop, rock, blues-rock, and jazz: the Beatles' "Ticket To Ride," Cream's "Strange Brew," Stephen Stills' "Love the One You're With," Randy Newman's "I Think It's Going To Rain Today," Sting's "She's Too Good for Me," Steely Dan's "Peg," and Elton John & Bernie Taupin's "Border Song." The man knows his way around top-grade blues and r&b songbooks too, revamping in his distinctive way Delbert McClinton's "Monkey Around," Keb' Mo''s "Keep It Simple," Allen Toussaint's "I'm Gone," Little Willie John's "Let Them Talk," Arthur Adams's "Love and Peace" (covered years back by Quincy Jones, the Jazz Crusaders, etc.) and the standard "Peg O' My Heart." There's also a fresh, inventive arrangement of the Quincy Jones film soundtrack number that Ray Charles interpreted so stirringly, "In the Heat of the Night," plus the jazz chestnut "Body and Soul." No wonder Paparozzi is held in such high regard by Steve Cropper, Will Lee, Snow, New Orleans music giants Nocentelli and Toussaint, the great soulmen Purdie and Rainey, and so many other American Music luminaries around the country. He sings songs with immense feeling, never with exaggeration or cheap sentiment. It's well nigh impossible, really, to single out one vocal or harmonica performance above all the rest here because he's so consistent with the lyricism of his expertly played harmonica and with the eloquence of his vocals. There's plenty proof that he's a superior blues player. No doubt Toots Thielemans would give a big smile upon hearing what this spry fifty-something does with his harmonica again and again. At all times, Paparozzi brings forth music straight from his heart, and his blue-ribbon accompanists respond in kind. Frank-John Hadley DownBeat/ Grove Press author.
This website uses cookies to personalize content and analyse traffic in order to offer you a better experience.
I accept Learn More
back to top