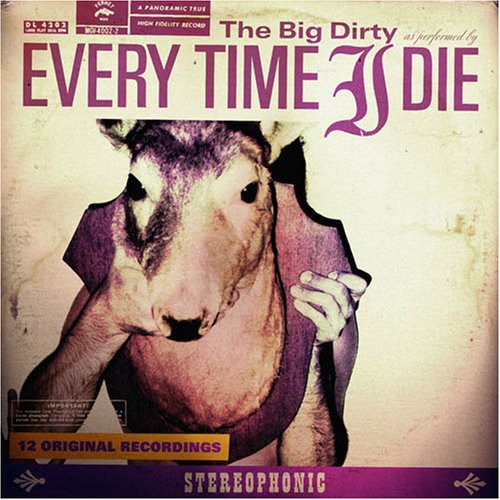 The Big Dirty
Artist: Every Time I Die
Format: CD
New: Not in stock
Wish

To this day, historians have not reached a unanimous consensus regarding the birth date of one of underground rock music's most important finds- the calcified remains of a winged, pony-tailed, drunk, hilarious yet sincere, musically inclined and mind-blowing awesome creature known as Every Time I Die. There is too much to mention on what is going on around the record, but a couple highlights include COVER OF ALTERNATIVE PRESS IN OCTOBER, direct support to UNDEROATH this fall, and a MYSPACE Secret Show, Featured Video and Featured Artist all in September around release. The band also holds the honor of being the only band to play Ozzfest, Warped Tour and Sounds of the Underground. Big things are afoot for ETID!

Until now, Buffalo's hardest rockers (harder than even the Goo Goo Dolls) have been a better interview than band. Like (too) many of today's metalcore sensations, these five smartasses often infuse their titles with far more wit ("Apocalypse Now and Then") than their hammer-on heavy spasms. The cutesy Thin Lizzy Jr. act has, thankfully, ground to a halt on Dirty, a nastier, more focused collection of badassery. "Imitation Is the Sincerest Form of Battery" has the chops to back up the pun, as does the tightrope clang of "Rendez-Voodoo" and the no-nonsense strafing of "Depressionista." While frontman Keith Buckley's strong suit is not melody or clean singing, his psycho caterwauling makes a more than appropriate megaphone for the band's unhinged intensity. Like the man says, "We're sucking the blood from the necks of guitars."
This website uses cookies to personalize content and analyse traffic in order to offer you a better experience.
I accept Learn More
back to top