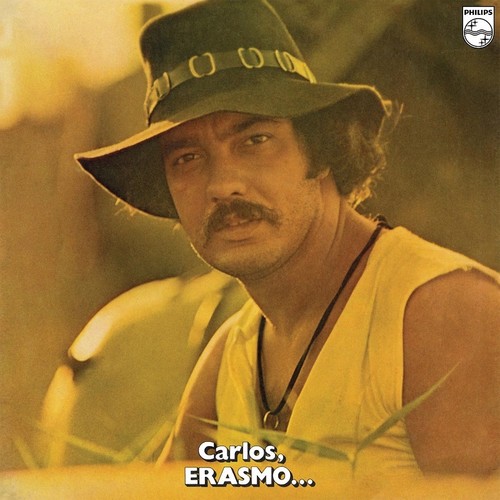 Digitally remastered edition of this album from the veteran Brazilian singer/songwriter. This album finds this maturing teeny-bopper delivering a mix of world class psychedelic rock, traditional rock 'n' roll, soul, funk, folk, bossa nova, and samba-rock to an unsuspecting Brazilian audience. Arriving in 1971 while Caetano and Gil were still in exile, Rita Lee had recently quit Os Mutantes and Gal Costa was onto a new sound, Erasmo's 1971 album was the closest thing to TropicĂˇlia around. Carlos, Erasmo... was co-produced by the TropicĂˇlia producer, Manoel Barenbein, including a new composition from Caetano, a few arrangements courtesy of RogĂ©rio Duprat and the musical talents of no fewer than three Mutants: lead guitarist Sergio Dias, drummer Dinho Leme and bassist Liminha, not to mention Brazil's undisputed psychedelic axe-master, Alexander Gordin, aka "Lanny", Carlos, Erasmo... is a virtual all-star team of TropĂ­calistas (not in exile). This album is considered a bedrock album within the Brazilian rock scene and a notable late entry in the TropicĂˇlia tradition, rocking harder than any album in his catalog, but also including wispy love songs, soul and funk moves, brassy pop tunes and a marimba-driven ode to marijuana. Erasmo Carlos has no counterpart in the universe of Anglophone pop music that could begin to hint at his relevance, popularity and his complex relationship with the only Brazilian pop star more universally recognized than himself, Roberto Carlos. He may be a beloved pop star and household name in Brazil, but hardly because of the music found on this album. While in retrospect it can be appreciated as one of his most creative, consistent and personal albums, it was also one of the least commercially successful and underappreciated of his long career, at least until recently. Embracing the artistic freedom of the global counterculture of the late '60s and early '70s, over the course of his three albums released between 1970 and 1972, Erasmo evolved from his bubblegum beginnings into a sophisticated singer/songwriter.