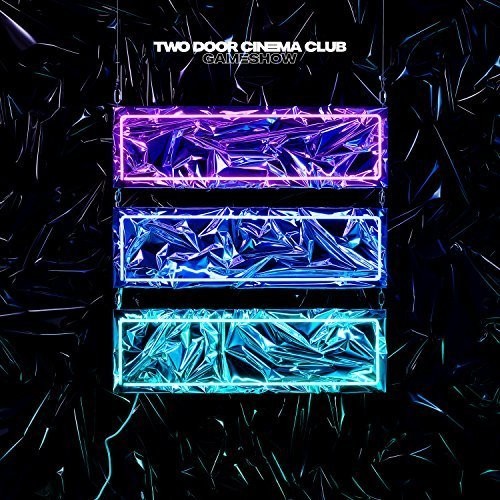 On Two Door Cinema Club's third album, Gameshow, the band has challenged themselves to indulge a wide and varied range of styles and influences stretching way beyond the traditional Two Door sound to take in Prince, Madonna, McCartney, Chic, Krautrock, neo soul and modernist pop, Gameshow , the result, is by far their most en-thralling and danceable record yet, albeit one full of the uncertainties of finding yourself and your place in the world. Bad Decisions Ordinary and Are We Ready? (Wreck) , all tackle Alex s dis-comfort with modern life, what he calls the information generation and the societal pressure to engage with the brain-frying online whirlpool.

I discovered this term weltschmertz, the German word for being at odds with the world around you, Alex says. The fact that it was a fully coined term and related to so many people that have existed and do exist made me feel it was okay to not exist on the same level as everyone else, it was okay to be comfortable doing your own thing. Are We Ready? (Wreck) was me... not attack-ing the world around me but outlining why I don t really get it and why I don t fit in with it. Elsewhere, their sense of dislocation is highlighted in Je Viens De La , a song inspired by a semi-nal 1960s sci-fi French film shot entirely in still frames like a slide show about time travel and Game Show which concerns the shallowness of the music industry games they were required to play. The whole world that we were in and what was expected of us, the disparity between the life we were living, the life we wanted to live and the life we were expected to live. It did feel a bit like a game show at times, fickle, false, fleeting, feeling unable to wrap your head around it. How do the band feel about embracing bigger pop elements? I feel really good about it, Alex says. We re not embracing the pop that s going on right now in a melodic sense or even structural-ly. Sonically we went the other way and started to experiment a lot more with things like using samples and more electronics. The two biggest inspirations on this record were Bowie and Prince, for me at least. Both total pioneers who did whatever they wanted to do. They really straddled that line between insane pop and total avant garde craziness. Bowie s death was a huge wake-up call to me that we d lost one of those amazing guys and it suddenly hit me that no-one s pushing that boundary anymore, so I thought maybe we could try that. We haven t gone anywhere near as far out-there as Bowie did, but this could be the first step on the road to really pushing the boat out. There shouldn t be a formula to pop music, but there is now. But you can do whatever you want. If you maintain that pop sensibility, if it s within you - and all of us have grown up with great pop mu-sic you can write those super-huge melodies but make the lyrics slightly more obscure. That give and take, it makes it far more interesting.