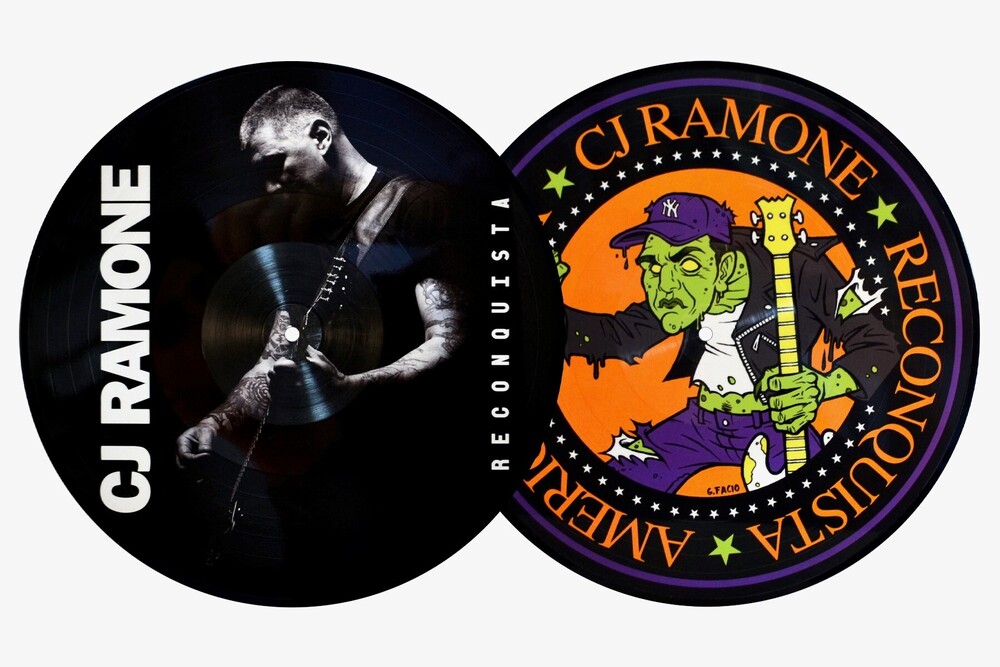 Back in 2012, CJ Ramone and long time Ramones crew member Gene Frawley came to us and asked us to help get his debut solo album pressed and out there, making sure CJ had records to sell when he hit the road. This wasn't a Ramones nostalgia trip-though of course CJ and his band obliged the fans with the requisite classics-this was a mission to write and record albums in his own right, that could sit proudly in a Ramones fan's collection; carrying on the legacy left by his fallen brothers. So, with the Pirates being the RAMONES diehards we are, it was a no-brainer!Without a label deal, CJ wrote and recorded his debut solo album, Reconquista, the old school, DIY way, with assistance from Steve Soto of the Adolescents and a number of other punk rock luminaries lending their musical chops. With an album that had the honesty and sound that so many Ramones copycats just never got right, along with instant classics like 'What We Gonna Do Now' and his heartwarming tribute to Joey, Johnny and Dee Dee, 'Three Angels,' CJ Ramone cemented his place in Ramones history. And it was only the beginning.In 2014, CJ hooked up with our friends down the street in San Francisco at Fat Wreck Chords. While Fat had released plenty of Ramones-influenced records over the years (Teenage Bottlerocket, Masked Intruder, etc.), they couldn't pass up the opportunity to release a record by an actual Ramone, and subsequently handled CJ's next three albums.CJ Ramone's second solo album, Last Chance To Dance, was recorded with an all-star backing band of Steve Soto and Dan Root (Adolescents), with David Hidalgo, Jr. (Social Distortion/The Bronx) on drums. With a sound and style true to the Ramones, CJ created a positively infectious punk rock record. Sometimes you just 'need a Ramones fix,' as Joey said, and CJ Ramone's Last Chance to Dance satisfies that craving in spades.American Beauty is CJ Ramone's third solo album and was recorded again with Steve Soto and Dan Root, with Pete Sosa (Street Dogs) taking over on drums. This effort crackles with the spirit of '76 and once again, the sound and vibe of classic Ramones records. CJ and his band toured the world extensively in between albums. Playing shows with the new generation of bands wasn't lost on CJ. He lent backing vocals to a track on a Night Birds album, and now, on his own record, got contributions from Big Eyes frontwoman Kate Eldridge and the horn section of Mariachi El Bronx on an unexpected and moving cover of Tom Waits' 'Pony.'As we hit 2018 and CJ geared up to record his fourth album (The Holy Spell...) and plan his final world tour before an unofficial retirement, he moved from his home of Long Island, New York, to our beloved San Francisco Bay Area. This afforded us the opportunity to see him more often and we got to talking about some special editions of his previous albums, in preparation for the intense touring schedule that was approaching. While Reconquista had been out of print for years and was an easy call, we thought Last Chance To Dance and American Beauty deserved the beautiful and collectible picture disc treatment too. With the blessing from Fat, we gathered new art for the b-side of each picture disc and put together this incredible set.As CJ has hit three continents so far this year (North America, Europe, Australia) and has two more still to go (South America, Asia), he took a small break to play a special set at our big Rock The Ship festival. We thought this was the perfect opportunity to move these picture disc sets from a 'tour-only' edition to worldwide availability. Keep in mind that these picture discs are strictly limited to 1,000 of each title, and will not be re-pressed
This website uses cookies to personalize content and analyse traffic in order to offer you a better experience.
I accept Learn More
back to top