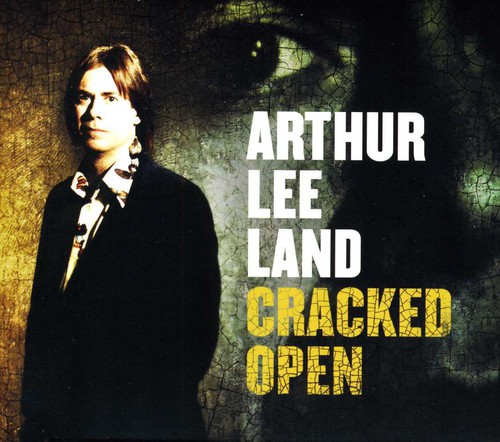 Arthur Lee Land: Vocals / Guitar / Banjo / Mandolin / Bass / Percussion Aaron Shier: Electronic Drum Programming, Sampling, Synthesizers and Atmospheric Sound Design Beth Nielsen Chapman & Leigh Nash: Background vocals on Hawthorne Tree David Hurlin: Tablas on Drum & A Chair Carol Lee: Lyrics (Except 'Good Enough') Produced & mixed by Aaron Shier & Arthur Lee Land Engineered by Aaron Shier Recorded & mixed in Arthur & Aaron's home studios Additional mixing at Ocean Way Nashville Studio B Mastered by David Glasser at Airshow Mastering, Boulder CO Photography: Jeremy Cowart Artwork / Design: Brad Davis "How come my heart feels cracked open..." There's no wonder why Arthur Lee Land's 4th album Cracked Open, offers an exciting invitation for the musically adventurous to discover a boundless, transcendent world. Arthur's groundbreaking style is driven by the integration of sophisticated musical, emotional and spiritual juxtapositions. It's been said; "Every one of these songs sticks to your soul...." Whether it's our own world or the world at large falling apart around us, Cracked Open speaks of the suffering and the transformation that is taking place in these times of uncertainty. Ironically for Arthur, shortly after finishing the album, it was losing his voice completely, finding a polyp on his vocal cord (and the miraculous healing without surgery 6 months later), relocating back to Colorado and then being diagnosed with Graves (Hyperthyroid) Disease that forced him to wait almost two years to finally release this album. Those experiences ultimately became a test of faith that "cracked him open deeply" and in the end strengthened him as a person and an artist. The veteran singer-songwriter, multi-instrumentalist and unforgettable Loop Artist will release his new 10 song album Cracked Open, May 14, 2013 on Perfect Groove Records. With 4 music videos already complete, the Cracked Open DVD, scheduled for a fall 2013 release, will give fans all 10 music videos, produced by the cutting edge talent of "Xiren." "Fresh!.... Arthur has a unique creative approach in his music." Grammy Award winning producer Bil Vorndik (Alison Krauss, Bela Fleck, Doc Watson) After the release of his previous recording Dragonfly (produced by Grammy nominated songwriter and producer Wendy Waldman), Arthur, wife/lyricist Carol Lee and his label, Perfect Groove Records, felt he was at a pivotal point in his career. He decided to embark on a studio project that expanded upon the sonics he had been creating live for years allowing him to play most all of the instruments including the 6-string banjo which became a central tonal focal point for this album. Songs include the electro/bluegrass title track "Cracked Open," the traditional and futuristic juxtaposition of "Do You Ever Think Of Me?" and Arthur's only lyrically penned autobiographical "Good Enough." Musically speaking, Electro-Americana may best describe Arthur Lee Land's eclectic fusion of folk-rock, worldbeat/bluegrass and electronica, but cannot fully explain the unique dynamics at work when Arthur enters the studio or takes the stage. The multi-talented performer blends elements from distinctive parts of his career for this recording: his longtime wheelhouse as a touring musician playing folk-rock, country and roots; a world beat/bluegrass hybrid, inspired by a tour of West Africa; and his Art of Live-Looping techniques which have defined his solo live shows since the early 2000s. Then add to this mix - co-producer, engineer and DJ Aaron Shier, who brought in his influences of electronic, house and pop music. From the first day of production, Cracked Open unfolded as a 'whole Album' in the truest sense of the word, taking on a life of it's own. "We recorded one song a week in my home studio, and we didn't know what the next song would be until the day before we recorded it. It was always like 'what's next?' We had about 40 songs to choose from but we had no idea what songs were going to end up on the record and we had to trust the process," says Arthur. In fact the song order on the CD is the exact order that the tracks were recorded in. One of Carol's lines in the song True North comes to mind: "there's something bigger going on, so learn some trustin' " Currently based in the small town of Lyons, Colorado, Arthur tours as a multi-instrumental solo act in which he utilizes "live looping" (live recording) technology to create "on the fly," a full band sound by layering guitars, six string banjo, mandolin, bass, African percussion, drum samples, beat boxing and other electronic sonic textures. "This guy exudes musical magic!"? --Steve Szymanski, V.P. of Planet Bluegrass ?(Promoters of Telluride Bluegrass Festival and Rocky Mountain Folks Festival) Arthur's intuitive collaboration with his lyricist/wife Carol Lee is an integral part of the artistic landscape of Arthur Lee Land...."How come my heart feels so cracked open / When the love is running deep / Someday we all will cross over / Maybe right now is all we'll ever be."
This website uses cookies to personalize content and analyse traffic in order to offer you a better experience.
I accept Learn More
back to top