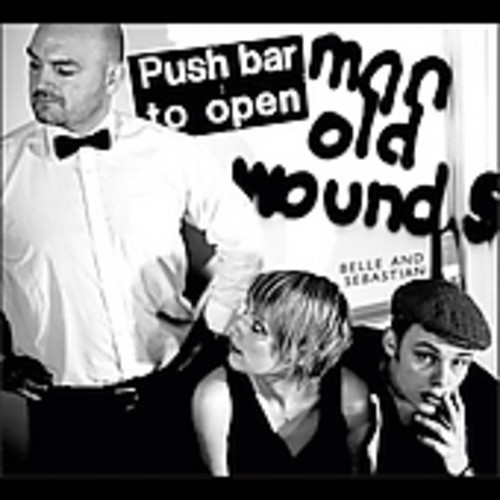 Push Barman to Open Old Wounds
Artist: Belle And Sebastian
Format: CD
New: Not in stock Used: In Stock and available for pick up
Wish

At long last, all seven of Belle and Sebastian's JEEPSTER EP, have been collected into a convenient 2-CD set. Often considered their best work and previously only available as hard-to-find imports or in a box set, the EPs consisting of 25 songs recorded from 1996-2001 are now available for the price of a single CD. The four tracks from the EP "this Is Just a Modern Rock Song" have never been released in the US before.

It contains the singles and EPs they released for Jeepster Records:

Having lost this flagship to Rough Trade, Matador does us a favor and fixes the botched 2000 "box set" Lazy Line Painter Jane, which compiled its tracklist from the Scottish band's first three EPs, on three separate discs, when all 12 would clearly have fit on one. Push Barman inadvertently forms a companion album as impressive as the group's Smiths-like classic second LP, immediately preceding If You're Feeling Sinister.

Tracks like the foreboding "Dog on Wheels," the jovial, eponymous "Belle & Sebastian," the sublime "A Century of Fakers," and "Lazy Line Painter Jane" were as inspired baroque-pop romps as anything produced in the later '90s, that post-grunge pause when people re-embraced sweet melodies, subtleties, undercurrents, and the power of not being hit in the face. Indeed, the 1996-1997 Stuart Murdoch had no equal-as these gems crackle with poetic wit and leisurely beauty. His work fell off a bit thereafter, as the four 1998-2001 EPs collected here on disc two reflect. But it was still quite solid-Stevie Jackson's Zombies tribute "Jonathan David" and the throwback-bracing "I'm Waking Up to Us" are not to be missed.

All in all, Push Barman adds up to 25 full-fledged, finished, fine B&S songs that stack up to their "legitimate" LPs, just as Louder Than Bombs is many a Smiths fan's favorite.