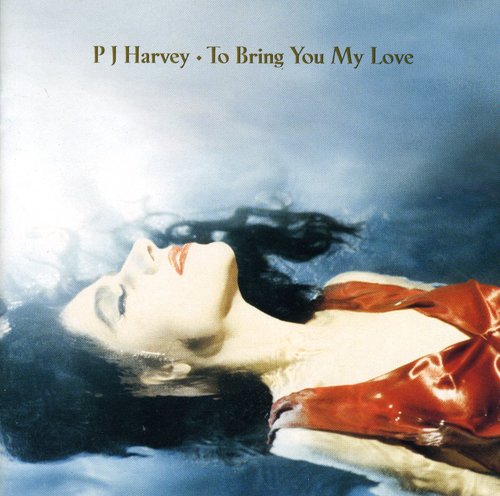 ''To Bring You My Love'' is a 1995 album by British singer-songwriter PJ Harvey. The album received huge critical acclaim. It was voted as the best album of the year in ''The Village Voice''s Pazz & Jop critics poll, and was also voted the year's number-one album by publications such as ''Rolling Stone'', ''The New York Times'', ''People'', ''USA Today'', ''Hot Press'' and, in "the biggest landslide victory in 15 years", the ''Los Angeles Times''. It featured in Top Ten lists for magazines like ''Spin'', ''NME'', ''Melody Maker'' and ''Mojo'', though a contrarian ''Time'' list dubbed it the "Worst Album of 1995." The album received two Grammy Award nominations as Best Alternative Music Performance and Best Female Rock Vocal for the single "Down by the Water", and was nominated for the Mercury Music Prize. SPIN magazine later ranked it at number 3 in a list of the best albums of the 90s. In 2003, the album was ranked number 435 on ''Rolling Stone'' magazine's list of the 500 greatest albums of all time.

''To Bring You My Love'' was Harvey's first album proper since disbanding the original PJ Harvey trio in 1993. For this recording she recruited producer Flood (Depeche Mode, U2, Nine Inch Nails, Smashing Pumpkins), her old Automatic Dlamini bandmate John Parish and a new line-up of session musicians including Joe Gore, Eric Drew Feldman, Mick Harvey and Jean-Marc Butty. She herself played guitar, keyboards, vibes and bells on the record, as well as co-producing it with Flood and John Parish.

As her second full-length release on a major label, ''To Bring You My Love'' received a heavy promotional push from Island Records. Extensive MTV rotation and college radio airplay for the first single "Down by the Water" — with its eccentric, eye-catching Maria Mochnacz-directed music video of Harvey drowning in an emerald pond while wearing an extravagant wig, heavy make-up and a slinky red satin evening gown — gave Harvey her biggest radio hit to date, reaching #2 on Billboard's Modern Rock chart. The album itself debuted at #40 on the Billboard chart and #12 in her native UK, and went on to sell roughly one million copies. The moderate commercial breakthrough of ''To Bring You My Love'' certainly had nothing to do with any scaling-down of her trademark lyrical intensity: the infanticide fable "Down by the Water" — whose whispered coda of "Little fish big fish swimming in the water/Come back here, man, gimme my daughter" references the old Leadbelly blues standard "Salty Dog" — ostensibly deals with a mother drowning her child.

The critical response was overwhelmingly positive — ''Rolling Stone'' praised the record as "astonishing… a true, enduring piece of art" in its four-star review, ''People'' claimed that "Harvey's raw, dense music rivals that of Bob Dylan himself for sheer gut-wrenching melodrama" and ''Hot Press'' raved, "this is a creation of oceanic beauty, depth and mystery in which all of the themes previously explored in fragments by Harvey are united in a rich and complex whole". In 2005, Diplo sampled "The Dancer" for a remix of the Mike Jones single "Still Tippin'" and then used another Harvey song-"Down by the Water"-the following year on Plastic Little's indie rap track "Now I Holler."

Harvey and her new five-piece live band supported the album with a 10-month worldwide tour that included a three-month stint opening for the band Live in the US, and a now-legendary performance at the UK's Glastonbury Festival wearing a shocking pink catsuit and black Wonderbra.

Harvey told ''Filter'' in 2004, "''To Bring You My Love'' was my first real venture into production and to use an incredible producer like Flood, who painted an atmosphere over my songs that I hadn't heard before, I was working with new musicians — it was all very, very exciting. And very, very draining. That was a difficult time in my life, as was the time of ''Is This Desire?''"