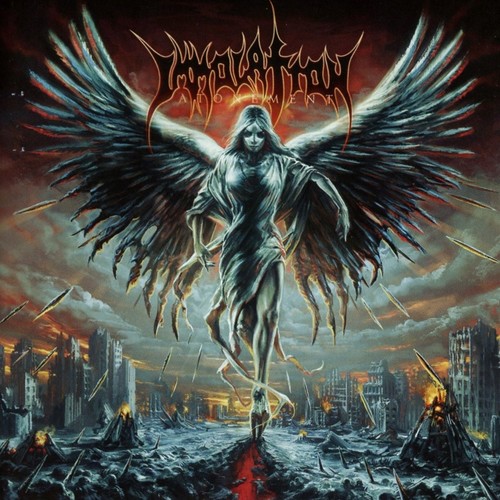 Immolation is a name long synonymous with the extreme music scene, delivering some of the most unique and creatively dark death metal the underground has witnessed over the past 28 years. 2017 will mark 29 years for Immolation and in February "Atonement" will prove that this is one band that does not look back, continuing to push the limits and remaining a vibrant force for the future of a genre they helped define. Since the release of their debut album "Dawn of Possession" (Roadrunner) in 1991, IMMOLATION has been paving their way down an ever evolving path of uncompromising musical devastation! Never a band to rely on their previous efforts, IMMOLATION has continued album after album to refine and hone their most identifiable style and sound, creating some of the darkest and most adventurous death metal the scene has ever heard. With such classic albums as "Here In After", "Failures for Gods", and "Close To A World Below" (Metal Blade), as well as their more recent critically acclaimed releases, "Unholy Cult", "Harnessing Ruin", "Hope and Horror"(ep) and "Shadows In The Light" (Listenable/Century Media), the band has developed into one of the premier extreme acts of our time. 2010 saw the next step in IMMOLATION's evolution with it's Nuclear Blast debut, "Majesty and Decay". With the release of "Majesty and Decay" IMMOLATION not only surpassed their previous releases musically, but had started a new chapter in their career with the added mix/mastering talents of Zack Ohren (Castle Ultimate Studios). Together with long-time producer Paul Orofino (Millbrook Sound Studios), the combination proved to be the key to some of the most powerful sounding IMMOLATION material to date! Not only had IMMOLATION taken their abilities so much further, with some of the most disheartening musical landscapes the band has ever created, but the sound and production was taken to new levels as well, unleashing all the unrelenting force the band truly offers! With their most solid production recorded at that time, accented by the remarkably stunning artwork of then newly recruited Par Olofsson, "Majesty and Decay" became an instant classic! Not too long after, 2011 saw the release of IMMOLATION's second ever ep entitled "Providence" (Scion A/V). This five song ep of all new original tracks was released by Scion A/V (Toyota) as an online free download, available for fans worldwide. Free cds and vinyl were only available during the band's U.S tour for this ep, making it an even more sought after release! Overall "Providence" proved again that the combination of Orofino & Ohren, with Par Olofsson once again at the artistic helm, was a team to keep! Production and artwork were once again some of the bands best. "Providence" was not just an ep, it proved to be a five song mammoth that found itself on some of the top release lists for that year! With IMMOLATION creating an interesting collection of avant-garde, yet extremely catchy songs "Providence" set the tone for where the band was heading, and a taste of what to expect from their next full length LP. Whoa!
This website uses cookies to personalize content and analyse traffic in order to offer you a better experience.
I accept Learn More
back to top