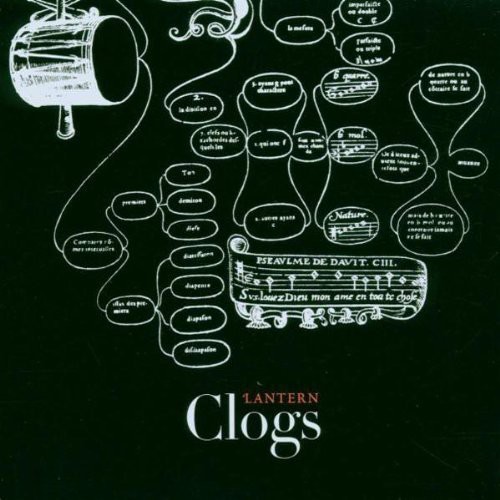 Lantern
Artist: Clogs
Format: CD
New: Not in stock Used: In Stock and available for pick up
Wish

BIO When trying to describe Clogs' music to other folks, it might be better to forgo any genre distinctions and head straight for the thesaurus so you can find fresh and exciting ways to say 'sublime.' Pitchfork Media*****(5 Stars) The eight new pieces on show share an evanescence and the feeling that this is music of such intense beauty that each successive piece is like another exquisite blow on a bruise.-The Guardian (UK) Few new CDs in any genre will do as much to challenge the way you listen to music.-Philadelphia City Paper Clogs THE BASICS: Clogs are a mostly instrumental project led by Bryce Dessner and Australia's Padma Newsome, both men familiar from their membership in the acclaimed rock band, The National. But don't call Clogs a side project. Their existence predates The National, and Clogs have released three widely acclaimed albums -- a highly melodic debut ?THOM'S NIGHT OUT (2001), then the experimental polyphonies of ?LULLABY FOR SUE' (2003), and finally the minimalist explorations of ?STICK MUSIC' (2004). NOW WHAT? When Clogs formed they were an oddball classical ensemble in indie rock clothing. Today, however, they're at the forefront of a scene including friends in groups The Books, Rachel's, and Bell Orchestre. Clogs' fourth album, 'LANTERN' (2006) is their finest and most varied effort to date. They augment their unique sonic palette (acoustic guitar, strings, percussion, bassoon) with melodica, piano, ukulele, and mandola. Guitarist Bryce Dessner goes electric. Per usual, Newsome adds haunting vocals to one song, the title track: 'Light me a lantern/in your lighthouse, my keeper/me a lantern' Consolidating and expanding on the sounds of their first three records, it also sees Clogs writing the best melodies of their career and incorporating more dub and rock influences. (The National's Aaron Dessner contributes bass to '5/4.') WHO? Clogs are Newsome (viola/violin/melocica/voice/piano), Bryce Dessner (guitar/ukelele), Rachael Elliott (bassoon/melodica), and Thomas Kozumplik (percussion). They met in the late-90s while studying at the Yale School of Music. Newsome started his career as a concert violinist in the Sydney Symphony Orchestra, before a six-year detour took him to an ashram in the remote region of New South Wales. He began composing in the 90s at the University of Adelaide, when he was awarded a Fulbright scholarship that brought him to America. Dessner is an established soloist, and veteran of groups including Bang on a Can All-Stars, which has given him in contact with major figures like Philip Glass and Terry Riley. Elliott is a proud Vermonter and active freelance musician. Kozumplik is a master percussionist familiar with most any style. HOW?: Clogs' 'classical' music is the result of a peculiar writing process more akin to a rock band or a jazz quartet. The members come to rehearsals with basic ideas that the group riffs on and develops in jam sessions and live performance. Newsome later arranges these ideas into elegant and complex musical narratives that meld and extend the ideas of minimalist, modernist, and romantic composers, adding sounds and melodies drawn from the folk music of India, the Jewish Diaspora, and everywhere else. HONORS & PRESS: STICK MUSIC earned Clogs' a profile and 8.6 review in the influential indie music site, Pitchfork ? as well as mainstream attention in The New Yorker, The Wire, Mojo, Salon, Time Out New York, and the New York Times, where they were featured in an article headlined 'This is Chamber Music? Stretching a Genre to It's Furthest Reaches (and Beyond).' In the last two years, Clogs have also earned accolades from the classical music establishment. In 2003, the National Endowment for the Arts and Chamber Music America awarded them the Special Commissioning Award, supporting two years of touring and a new piece by respected composer, Ingram Marshall. In 2004, Harvard University's Fromm Music Foundation awarded Newsome his own commissioning award and residency at the Walton Estate in Ischia, Italy. In 2005 they made their Symphony Space debut, and 2006 includes a UK tour with The Books (supported by Arts Council England), and debuts at The Kitchen and Merkin Hall. RIYL: Brian Eno, Sigur Ros, Penguin Cafe Orchestra, Aphex Twin, Erik Satie, Renaissance music, Moondog.
This website uses cookies to personalize content and analyse traffic in order to offer you a better experience.
I accept Learn More
back to top