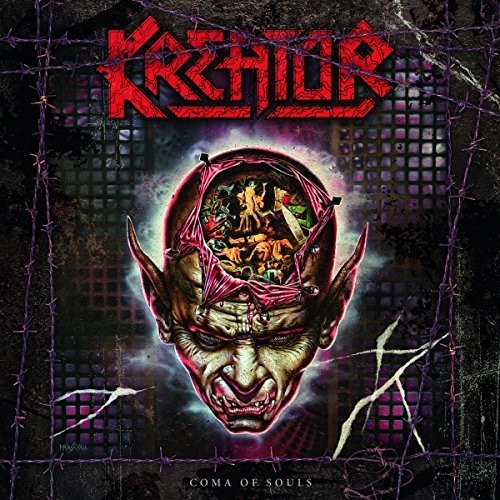 Kreator TITLE: Coma of Souls (3 vinyl LPs) Coma of Souls is the fifth studio album by German thrash metal band Kreator, released in 1990. It was reissued in 2002, with the lyrics for the last four songs missing from the booklet. It would be the last album before the band began experimenting with influences from other musical genres. It also would be the last record issued in the U.S. by Epic Records. Formed in Essen, Germany in 1982, Kreator are arguably the most influential and successful European thrash metal band ever, like many of their European speed metal brethren, Kreator fused Metallica's thrash innovations with Venom's proto-black metal imagery. Often referred to as one of the "Big 4" of Teutonic thrash metal, and they are often credited with helping pioneer death metal and black metal by containing several elements of what was to become those genres. The band has achieved worldwide sales of over two million units for combined sales of all their albums, making them one of the best-selling German thrash metal bands of all time. The band's style has changed several times over the years, from a Venom-inspired speed metal sound, later moving in to thrash metal, and including a period of transitioning from thrash to industrial metal and gothic metal throughout the 1990s. In the early 2000s, Kreator returned to their classic thrash sound, which has continued to the present. Kreator's fifth album, Coma Of Souls came towards the end of the thrash metal explosion of the 1980's and retained their classic thrash sound whilst combining more melodic elements of classic metal bands like Iron Maiden and Judas Priest. Critically acclaimed by both fans and press, Coma of Souls was a strong, firm step forward for the band, it proved they weren't content to sit and wallow in the thrash back waters but were determined to move into a new decade with a bold, thrusting sound.
back to top