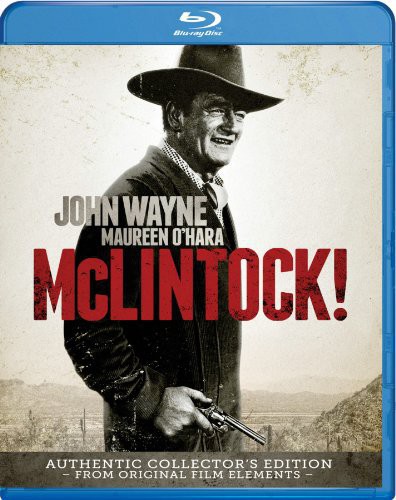 Wayne shows off his funny side in this 1963 western, a comedy inspired by THE TAMING OF THE SHREW. Starring as wealthy cattle baron G.W. McLintock, Wayne shows a real sense of comic timing in several scenes filled with slapstick humor. After his wife (Maureen O'Hara) and daughter leave him for the East, McLintock attempts to win them back. The dynamics between O'Hara and Wayne are the strong suit of this film, the actors having worked together previously on THE QUIET MAN. As this is by no means a revisionist western, McLintock's chauvinistic attempts to "tame" his wife fit within the problematic ideology of the larger western genre. The ultimate example of this comes at the end of the film when McLintock settles his marital dispute by publicly "spanking" his wife in what is now a notorious cinematic moment.