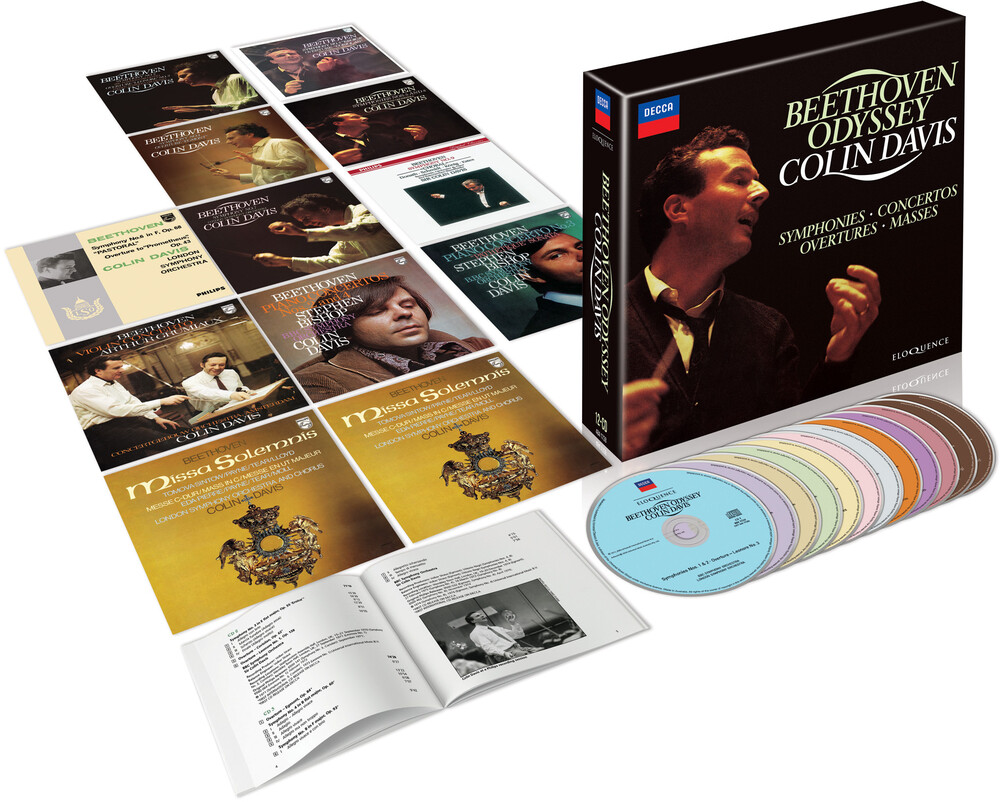 A master Beethoven conductor in his prime - a 12-CD set presenting the 'London' Beethoven recordings of Sir Colin Davis, including the Symphonies, a selection of Overtures, the five Piano Concertos (Stephen Kovacevich), Violin Concerto (Arthur Grumiaux) and the two Masses. These broadly-sung and spacious performances, unexaggerated yet alive, are collected together for the first time. When Colin Davis became it's Chief Conductor in 1967, the BBC Symphony Orchestra was known as the house band for the BBC Proms, specializing in new music, and a radio orchestra first and foremost. With this series of Beethoven recordings the orchestra entered the mainstream commercial market and showed itself the equal of many more glamorous ensembles, not least thanks to the rich and rounded sonority cultivated by Davis. A 1961 recording of the Seventh Symphony with Beecham's Royal Philharmonic Orchestra had gathered much critical praise, but Davis's 1976 remake with the LSO proved that the elemental fire of the early recording was no fluke. These are broadly sung and spacious performances, unexaggerated and yet alive with the strong accents and inner detail that marked out Davis's readings of music from Mozart to Tippett. The five piano concertos with Stephen Kovacevich quickly became a staple of the Philips catalogue, but the symphony recordings fell out of print: they have been compiled here for the first time, receiving new remasterings and first publications on CD, as are several of the overtures. There is an opportunity to compare the young firebrand Davis and his calmer self in middle age with two accounts of the Pastoral Symphony: with the LSO in 1962 (from the same sessions as a previously unpublished Second Leonore Overture - unpublished until now!) and with the BBCSO in July 1974. The First Symphony also receives it's first appearance on a Universal Music label. The BBCSO cycle was left incomplete, and Davis recorded both the Mass in C and Missa Solemnis with the LSO - again, full-bodied readings that have maintained their place in the catalogue and drawn praise for their unaffected, straightforward eloquence - but his first recorded Ninth had to wait until 1985, once he had become Music Director of the Bavarian Radio SO in Munich. The playing here is superbly refined and animated by a springy articulation that was a Davis specialty and set him apart from the German Romantic tradition in this repertoire, as did the observance of repeats. The most complete compilation of Davis's 'London' Beethoven ever issued, the set is published with a new essay by Peter Quantrill, and a tribute by Costa Pilavachi, who worked with Davis during his time at Philips.